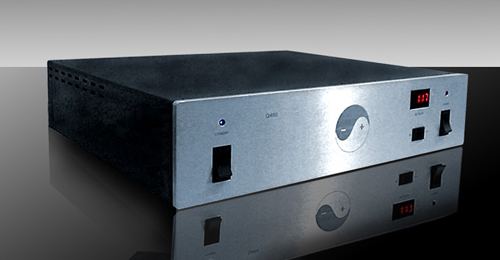 FOR MANY YEARS, the audio/video as well as other high-tech industries have been troubled with electrical interference. “Unclean” AC and dirty or high impedance grounding are often cited as the cause. But most of the time, theories and solutions regarding noise result in failure. Little is truly understood about noise problems and AC power.

The basic study of electricity reveals this fact: wherever there is an impedance load on ac power, there will be power distortion. Much in the same way undertow currents on a beach create small waves that roll back against bigger waves and weaken the wave’s force, impedance loads cause reactive currents to “roll back” which distorts and weakens the power. These are called harmonic currents or “harmonic distortion.” Impedance loading on major U.S. power grids that causes this distortion amounts to over 85% of the total power usage.

Harmonic currents propagate throughout power and grounding systems and subtly corrupt electronic signal-circuit operations. In digital equipment, higher error rates appear. Harmonics can also affect internal clock frequency functions that can result in catastrophic data corruption and system failures — even an occasional disk crash. In a recording studio, these undesirable elements may appear as hum or a buzz or perhaps an overall muddy sound.

Reactive currents that propagate throughout the grounding system are at the heart of the matter. Though non-linear or reactive loads are frequently blamed as the source of these problems, it has been found that conventional AC wiring methods are largely responsible for propagating this local interference. Reactive currents resulting from non-linear loading are a simple law of physics. How one accommodates or adjusts to this phenomenon (or doesn’t) has far more to do with associated problems that one may encounter.

Standardly, 120-volt power is delivered in what may be called a “differential mode” format. Differential ac means that current flow in the two circuit conductors is equal but opposite, however only one circuit wire (the “hot” side) has voltage potential with respect to ground. The other circuit wire reads (neutral) zero.

Conventional 120-volt power may also be referred to as “unbalanced.” Unbalanced power provides the means by which common harmonic and reactive currents build up on neutral wires and grounding circuits. Balanced RF filter capacitors and switching power supplies routinely shunt a small but constant trickle of current directly into grounded audio chassis from the “hot” side of the circuit which further degrades a system’s grounding reference. Once in the ground reference, these trickled artifacts invade signal circuitry and contaminate program material.

Engineers at Equi=Tech have developed an electrical system that reliably addresses these problems. The systems utilize a patented transformer with a critically balanced secondary output coil. As usual, impedance loads will still react to power but reactive currents can no longer propagate in the grounding system. Instead, they collapse because they are balanced. Under this balanced condition, noise cannot manifest. It now nulls (sums to zero) at the ground. Common mode noise rejection is increased throughout all of the electronics. In a well tuned balanced power system, the grounding reference remains quiet all of the time.

Because the ground is clean, shields now work more effectively. Here is the true single-point technical grounding reference for a complex recording studio. Single-point grounding enables audio and video cable shields to be grounded at both ends of the run (instead of telescoped from one end) which results in lower EMI/RFI interference. In many such ways, noise levels in an audio/video system are significantly lowered.

We at Equi=Tech are the pioneers of this new technology. After years of product development, we are happy to present a line of turn-key electrical systems for the recording studio, video production facility and high-tech environment manufactured to meet the highest of standards. Please, take time to read the attached information on this website. Feel free to call us with your questions anytime.